How Is Linen Fabrics Made ?

Many people are guilty of not knowing where things come from or how they are made and so it may be surprising to know that linen fabric is made from a vegetable, not just a vegetable but one of the oldest plants in our history.

The flax plant is an annual plant, meaning it only lives for one growing season. The Linen fabric is made from the cellulose fibres that grow inside of the stalks of the flax. After about one hundred days the flax plant is ready to harvest. Preferably the stems are pulled up from the root rather than cut at the base, this increases the length of the fibre produced. Unfortunately, the process has not been mechanised to pull the plant up at the root, only to cut it at the base meaning that the higher quality linens were pulled from the earth by hand.

After harvest, the stalks are dried for several weeks before the seeds are removed by crushing open the dried seed pods. Flax fibres are considered bast fibres, bast fibres are collected from the inner-bark of the plant. Fabrics made from bast fibres like linen, rattan or hemp are usually strong and durable.

A process known as retting is responsible for breaking down the sticky pectin that holds that bast fibres to the plants’ structure. There are different forms or retting, but all methods involve exposing the stalk of the flax to moisture, this eventually causes the inner cells of the stalk to swell and burst allowing the breakdown of the pectin.

Water retting produces the highest quality fibres and takes place in slow-moving or stationary bodies of water like ponds or bogs. The more stagnant the water, the fast the retting process.

Dew retting is most common in areas with few water sources but experience warm daytime temperatures and heavy dew on a night. Flax stalks are spread across a grassy field where the dew and warmth cause fermentation which dissolves the stalk. This method yields a poorer quality fibre.

Tank retting takes place in large vats. The stalks are soaked for several hours to remove dirt and debris, the water is then changed and the stalks are left to soak for a further few days.

Chemical retting is also an option however can cause a huge amount of damage to the environment and the fibres themselves so is not the preferred method.

The stalks, known as straw, have been retted and are left to dry out for anywhere from a few weeks to several months in order for the straw to cure. After curing, there may be some parts of the woody stalk still stuck to the bast fibres, the straw is passed through rollers that crush the wood making it easier to remove, and this is known as scutching.

Scutching involves a small wooden comb that is scraped down the length of the fibres, pulling away any broken wooden bits from the fibre. The separated bast fibres are then thoroughly combed to split and polish the fibres and remove any shorter lengths, known as tow fibres. These tow fibres can be spun into a coarse yarn that can be used to make low-quality linen products.

The flax fibres can now be spun, spinning involves twisting together the drawn out strands of fibre to form yarns. Flax is always spun very finely, resulting in a thin yarn but a thicker yarn can be produced simply by spinning multiple tangles of yarn together. Linen yarn is typically woven into sheets; multiple threads are interlaced both horizontally and vertically. This means that linen is relatively inelastic, the nature of the weave means that linen is quite breathable making it a good choice for curtains. 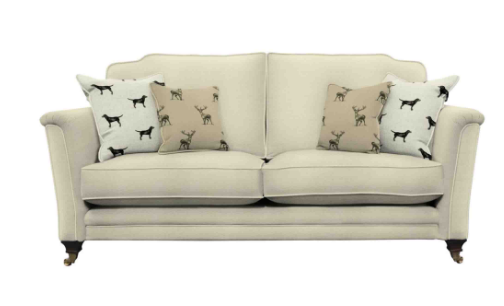 At Yorkshire Fabric Shop we have a range of linen fabric that can be used for upholstery or made-to-measure curtains. We have a passion for fabric but we care about our customers and strive to provide the highest quality fabric for your needs. You can search our range of linen and other fabrics using our fabric finder and even order free samples; you can also visit our warehouse and experience the fabric first hand. If you want to find out more you can contact us on 01924 728 753, use our contact form or email help@yorkshirefabricshop.com